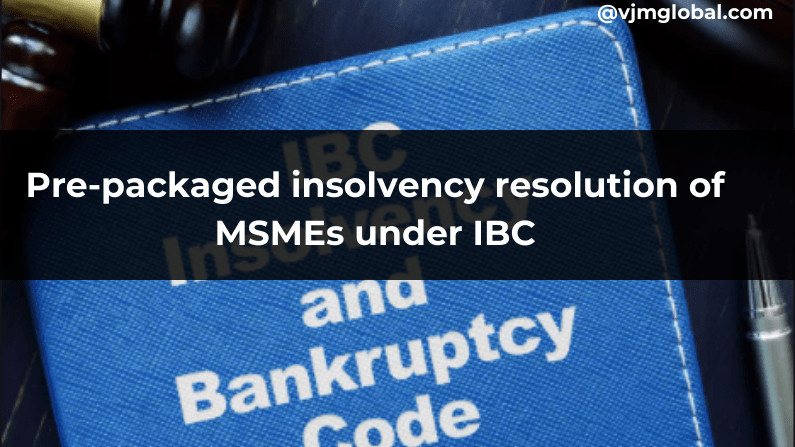 The ordinance in essence has amended the Insolvency and Bankruptcy Code 2016 allowing the central government to notify such pre-packaged process for defaults of not more than Rs. 1 crore to be initiated by the corporate debtor.

The main aim of the Ordinance is to provide relief to MSMEs by way of an alternative efficient process of insolvency, in a manner that is least disruptive to the continuity of their businesses.

As we know that the pandemic affected businesses and the economy at a large scale, the Government has taken several measures to mitigate the distress caused by the pandemic, including increasing the minimum amount of default for initiation of corporate insolvency resolution process to Rs 1 crore rupees and suspending the filing of applications for initiation of corporate insolvency resolution process regarding the defaults arising for one year beginning March 25th, 2020.  Such suspension has ended on March 24, 2021, itself.

1. What is the pre-packaged Insolvency resolution plan?

A pre-packaged resolution plan is essentially a form of restructuring that allows the creditors and debtors to work on an informal plan and then submit it for approval.

MSME businesses are usually managed by promoters and it is difficult to revive them after the management is expelled under the normal Corporate Insolvency Resolution Process (CIRP).

Under the new ordinance, participation of eligible existing promoters is encouraged, with the board continuing in control and the debtor proposing the base resolution plan, which then shall be put to competitive bidding through the Swiss challenge.

Thus Pre-packaged insolvency resolution will help the corporate debtors to enter into a consensual restructuring with creditors and address the entire liability side of the company.

2. Key features of the pre-packaged resolution are:

The IBC currently stipulates a maximum of 270 days for the completion of the entire CIRP. Given that MSMEs have limited resources/finances to go through a long and diligent insolvency process, the reduction in the time limit for resolution comes as a blessing for insolvent MSMEs.

The scheme, where only the debtor will get to initiate the bankruptcy process, is expected to yield a much faster resolution than the extant corporate insolvency resolution process (CIRP) and cut costs. It could also reduce litigation, often triggered by defaulting promoters to retain control of their firms, and help thousands of MSMEs struggling to cope with the havoc wrought by the Covid-19 pandemic.

Further, one of the most important features of the Pre-packaged resolution scheme is that it allows the management of the affairs of the corporate debtor to continue to vest in the Board of Directors or the partners, as the case may be, of the corporate debtor, subject to conditions specified, unlike in the CIRP where the resolution professional gets to run the affairs with guidance from financial creditors. If creditors want to initiate bankruptcy proceedings against MSMEs, they can still do so but only through the CIRP and not through Pre-pack.

There will be lesser possibilities of disputes, which will allow the process to run more efficiently than the normal CIRP.

The government has deemed it fit to first introduce pre-packs for MSMEs as they are critical for India’s economy and they contribute significantly to the country’s gross domestic product besides providing employment to a vast population.

Also, MSMEs in India have relatively suffered most during the current pandemic times, due to which it is essential to uplift them. With a threshold of a debt default at ₹ 1 crore now under IBC, most of the MSMEs are out of this range.

6. Rights of the creditors being protected

The Pre-pack insolvency resolution plan although based on the debtor-in-possession approach vests significant consent rights to financial creditors in order to ensure that the mechanism is not misused by errant promoters.

These rights include the applicability of Section 29 A (which is a restrictive provision disqualifying those who had contributed to the downfall of the corporate debtor or were unsuitable to run the company from submitting a resolution plan/ participating in the bidding of the corporate debtor) and 2/3rd of the creditors’ consent for both initiation and approval of the base resolution plan.

In addition, the creditors’ committee can also convert the pre-pack process to the usual CIRP by 66% majority at any time, or require the board to cease control through the intervention of the NCLT in case of fraud or mismanagement by the existing management.

The scheme is available to entities that have neither undergone bankruptcy proceedings in the preceding three years nor are facing liquidation orders. The scheme further disallows a business to avail of it if the major shareholder is an undischarged insolvent or wilful defaulter.

In addition to these, by insertion of new Articles 67A and 77 A, the amendment provides strict penalties for fraudulent management of the corporate debtor or providing false information or any material omission in the application or the list of claims. Thus, the amendment has been designed in a manner to provide a more friendly and ameliorative mechanism of resolution of stressed assets for MSMEs while ensuring that they don’t go scot-free in case of any manipulation, therefore, keeping a fair balance to protect the interests of creditors as well.