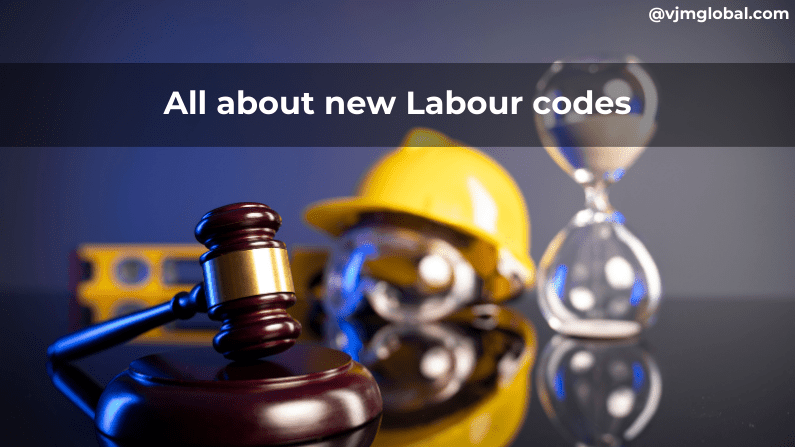 The Labour Ministry has envisaged implementing the four labour codes from 1st April 2021 this year in one go. But the four labour codes which were earlier set to be notified on April 1, got delayed due to the delay of the states in finalizing the rules which forced the government to delay the implementation of the codes. The Labour Ministry is believed to be ready with the new rules and will notify them once states finalize the rules to be implemented in their domain.

One of the biggest impacts of the new labour codes will be on the take-home salaries, which is expected to reduce, owing to the fact that the government is eyeing increasing contributions towards provident fund (PF) and other post-retirement schemes. The new laws are expected to come into play soon, which will force employers to modify their employee compensations.

The 2nd National Commission on Labour (NCL) recommended consolidation of central labour laws.  It observed that there are numerous labour laws, both at the centre and in states.

Further, labour laws have been added in a piecemeal manner, which has resulted in these laws being complicated and consistent with outdated clauses. The Commission emphasised the need to simplify and consolidate labour laws for the sake of transparency, and uniformity in definitions and approach.

Since various labour laws apply to different categories of employees and across various thresholds, their consolidation would also allow for greater coverage of labour.  Following the recommendations of NCL, the four Codes on wages, industrial relations, social security, and occupational safety were introduced in Parliament.

The central challenge to labour regulation is to provide sufficient rights to workers while creating an enabling environment that can facilitate firm output and growth, leading to job creation.

Companies should find it easy to adapt to changing business environments and be able to change their output (and employment) levels accordingly.

At the same time, workers need the protection of assured minimum wages, social security, reduction in job insecurity, health and safety standards, and a mechanism for ensuring collective bargaining rights.

This would also require a labour administration that effectively manages conflicts and ensures the enforcement of rights.

(i) Increasing the threshold for lay-offs, retrenchment, and closure,

(iii) Specifying safety standards and working conditions to be provided and maintained by establishments, and

(iv) Deciding the norms for fixation of minimum wages.

2. List of Acts which are being subsumed by the four labour codes

3. Some of the Key Issues in New Labour codes

State governments will fix the minimum wages for their region which cannot be lower than the national floor rate for wages. The code also provides that there would be a review/ revision of minimum wages at intervals not exceeding five years. Further, the rate of wages for overtime work shall not be less than twice the rate for normal wages.

All employees whose wages do not exceed a specific monthly amount (to be notified by the central or state government) will be entitled to an annual bonus. Bonus is payable on higher minimum wage or the wage ceiling fixed by the appropriate government for payment of bonus. The minimum bonus prescribed under the Code is 8.33 percent and the maximum bonus payable is 20 percent.

3.4 In the Occupational Safety, Health and Working Conditions Code Bill, 2020

4. Key differentiators on the applicability of the Code of Wages

5. The delay in implementation of Labour codes

Pertaining to the new labour rules, companies were required to make major changes in the employees’ salary structure starting from April 1, but the government has deferred implementation of the labour codes, including the Code on Wages, beyond April 1, giving companies more time to revamp their salary structures and human resource-related policies, which could have led to higher employee costs.

Adding to that this was not the best time to implement the codes because any economic improvement so far could be reversed with the resurgence in Covid cases. Companies although would have provided enough flexibility to employees and significantly improved the ease of doing business, it was better not to rush into it.

As of now, companies will maintain the status quo but they would have preferred it from the beginning of April to coincide with the financial year.

In the changed economic scenario, the government has to balance the rights of workers and economic recovery. Favoring one over the other will impact the country’s prospects in the long run. These bills make a significant change to the regulation of labor and the employer-employee relationship.