To avoid any error and possibility of fraud, the government is in process of implementing various new features in filing of GST returns. GSTR-3B is a monthly return which is used to furnish summary of sales and purchase made during the month alongwith computation of GST liability. However, Most of the common issues being faced or error made in GSTR-3B filing are as follows:

To avoid above mentioned errors, GSTIN has implemented new features from GSTR-3B of the month of November, 2020. GSTIN has enabled auto-population of following information in GSTR-3B for taxpayers who are liable to file GSTR-1 on monthly basis:

1.1 Auto population of detailed of outward supplies in GSTR 3B from GSTR 1

1.2 Auto population of detailed of inwards supplies in GSTR 3B from GSTR 2B

Details of Eligible-Input Tax Credit (ITC) in Table 4 and details of Inward supplies liable to Reverse Charge in Table 3.1(d) are auto-populated based on information appearing in GSTR-2B for the tax period. Form GSTR-2B is an auto-drafted form containing details of Input tax credit. GSTR-2B is auto-populated based on information filed by the supplier in their GSTR-1.

2. Salient features of auto population of GSTR 3B

3. Reference for auto population of GSTR 3B

Information in Form GSTR-3B shall get auto-populated in following manner:

It has brought to the notice of the department that the system is giving alert when the taxpayer revises the auto-populated values in table 3.1(d)- inward supplies attracting reverse charge where variation exceeds 10% of the amount auto-populated.

Department has clarified that this alert is erroneous. The technical team is working to resolve the same at the earliest.

Meanwhile, the taxpayers may continue to declare their correct liability under reverse charge in Table-3.1(d) and proceed to file GSTR-3B

Extension in statutory compliance due to COVID-19

Must Know Facts About GSTR-3B: Return Filing, Format, Due Date

Important Points to be considered for GSTR-3B return under GST In this article we will discuss, about QRMP scheme issued by the Central Board of Indirect Taxes & Customs (CBIC) under Goods and Services Tax (GST) which help small taxpayers whose turnover upto Rs.5 crores. The QRMP scheme provides to the taxpayers to file a return GSTR-3B on a quarterly basis and pay tax every month. 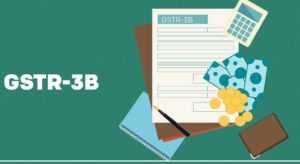 Must Know Facts About GSTR-3B: Return Filing, Format, Due Date

Got your business registered under the GST regime? Then, you must be already aware of the GSTR-1, GSTR-2, and GSTR-3 forms. Similar to other GST

On 22nd January 2020, the Finance Ministry announced that taxpayers are now allowed to file GSTR-3B returns in a staggered manner. After taking the hassle